The phrase “timber framing” to the uninitiated brings to mind loggers yelling “timberrr!”, early American settler’s homes, dark log cabins, barns, and snowed-in 19th-century New Englanders-visions of days gone by and a humble and difficult past. But the first impression on walking into a modern timber-framed home is cathedral ceiling. Space. Light. And the warm and stimulating exposed wood, full of character, long sturdy lengths of it, framing and crossing in all that space above. “It’s also history and romance,” says Jeff Davis, president of Davis Frame of Claremont.

Timber framing was cutting-edge architecture in Egypt, China, and Japan thousands of years ago. From the shrines and temples of Japan to the latticed houses and churches of medieval Europe to the European settlers in the New World, right up to New England in the 1800’s, the craft of raising and connecting large timbers for a strong wooden building frame, without nails, was well known. But with the industrial age came an easier way to make houses, using mass-produced, much smaller-sized wooden studs and boards, attached with newly available, inexpensive, factory-made nails. Timber framing became a lost art to machine-age carpenters and builders. In the 1970’s, timber frames, with their unique interiors, began to make a comeback in a niche housing market. Today’s technology has transformed the process of this ancient craft and caught up with modern concerns about energy efficiency.

From their new timber-frame home in Enfield, with the typical high ceilings and open spaces, Jim and Barbara Kelleher’s living room looks out through a two-story wall of windows on Mascoma Lake. Owner of a local construction company, Jim had been intrigued with timber-frame homes since he built his first house in the 70’s. Jim and Barbara worked with the design team at Davis Frame to design this modern timber frame, with large solar panels to heat the water for domestic use and to power the comfortable radiant heating beneath the floors. There is a “wow” factor to the great room of the house, with its chimney, views, and space, with a spiral staircase on the side and interior second-floor balcony overlooking the room. But despite the size, says Barbara Kelleher, “You get a warm feeling, and there’s a casual feel so you’re able to relax.” Since interior walls are not required to bear any loads in a timber frame, the interior can be as open as desired, which gives a feeling of togetherness and informality, says Jim. 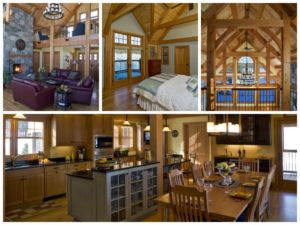 Like many modern timber-frame homes, despite the high ceilings, the house is so tight that no “chimney effect” takes place with the heat within the house. The energy efficiency is high enough to require a ventilation system to ensure that enough fresh air is getting into the house in the winter. The heat from the outgoing air is recycled to warm the incoming fresh air, but the main efficiency of the timber-frame house is in the continuous insulation around the house that the timber framing makes possible. While the cavities in the walls of the conventional houses can hold increasingly efficient insulation, with only wood as insulation at the studs that hold the walls, the R-value plunges to one at those spots. The modern timber-frame house is completely encircled, outside the wooden frame, with R26 stress skins, or structural insulated panels (SIPs), with no gaps. The stress skin roof panels are R40.

Davis Frame is a company of 11 people, and unlike timber framers of the past, most of their work is done on computers. In a few low industrial buildings in Claremont, with Mount Ascutney rising to the northwest, Jeff Davis remembers hand cutting timber frames with his business partner and co-founder Rick Bascom at Rick’s family farm in Brownsville, Vermont, just on the other side of Ascutney. He used saws and chisels, and an old sit-down, hand powered drill, and worked the wood on the building site. But a lot has changed since the 1970s, and after a career in timber framing, most of Davis Frame’s work is done on the computer, and the 100 to 300 pieces needed to assemble each unique frame are sent out in kits, like giant erector sets. Designers work with clients for weeks or months on finalizing a custom design. Jeff Davis, who also plays in a classic rock band, says, “Plans are infinite, just like songs are infinite. You change a note here or there, it’s a different melody. It’s almost impossible for someone to buy a premade set of plans for their particular site and desires. So our standard plans are just a starting point, but we can also start with a clean sheet of paper. A lot of factors go into custom design, like views, solar gain, garages, budget, etc. We can’t create kits in advance, because every home is different.”
Ancient Craft, High Technology

Once the plans and the sometimes long and arduous building permit processes are completed, the 11-person team at Davis cuts the wood for the frame in a week or two. Most of the work has already been done on a computer. The builders of ancient Japan and 1800s New England would marvel equally at the computer numerical control (CNC) software and large robotic machines that follow its instructions. Simply feed the timber from the sawmill, primarily Douglas fir, into one end of the machine, and the long rectangular cut timber is grabbed and manipulated while various cutters whirl in three dimensions, sending out a precision measured and carpentered custom timber piece, ready to assemble into the large and strong puzzle of interlocking beams, held together securely without nails. There is hand finishing to achieve aesthetic perfection, and then the pieces are assembled and sent out like a giant erector set to the builder in Colorado, Texas, Vermont, or Enfield (Davis Frame ships nationwide). Usually a Davis Frame employee travels to the site to provide technical assistance. “It’s very enjoyable,” says Jeff Davis, “because most of the time we work with conventional carpenters on-site with no experience with putting up a timber frame. (Davis Frame doesn’t build the house away from their local area; usually a local contractor is hired for the actual assembly). The carpenters find it very exciting because it’s new to them. Drilling and putting these things together and pegging with wood instead of grabbing a nail gun and nailing a bunch of studs together-this is a lot different for them and every time I find that they’re very satisfied, very happy.”

“And at the end,” says Davis, “at the raising of the frame, we put a little bough at the peak, to bless the house. It’s called the tree of life, and it’s a ritual that’s been used for a thousand years. That’s always a nice time, a nice celebration.”